From Burnout Wiki
Jump to navigation Jump to search

A debug-enabled executable of Burnout Legends' PlayStation Portable version, presumably compiled on June 6th, 2005 based on internal text strings. It possesses plenty of developer features, such as a full-fledged debug menu and code asserts. It was initially discovered amongst the assets of Legends' July 8th, 2005 build, being used as a placeholder for a PSP Game Sharing executable.

This build contains two menus where several cheats can be enabled and disabled. The first of the two can be found in the Driver Details submenu, and the second can be found by entering an event then scrolling to the bottom of the pause menu. 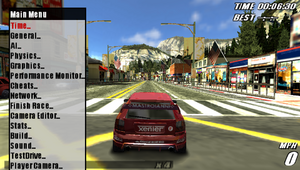 This build contains a normally inaccessible debug menu with various developer functions. Use the cheat code below to unlock the menu:

Press Select to open the menu, and hold L+R to be able to navigate its options instead of having the game itself use your button inputs. Use D-Pad Up/Down to move between options, Cross to select and Triangle to go back.

This build contains functionality allowing for debug exporting of the ValueDB's raw data values to XML-formatted .cfg files. Values for various functions can be exported using this method, such as cameras, AI values, and car physics. In order to enable the game to write these files to a folder, use the below cheat code:

The proper directory structure still needs to be created before being able to save the files. For Windows users, save this CMD script to the root of your PSP's memstick (in the same directory that the /PSP folder is located) and run it; it will create the required folders automatically.

To export the current vehicle physics settings, use the Save Data... option, located in the Car subcategory of the Physics menu. The resulting file will be located in the BLGS_SaveData/DbgExport/ValueDB/VehiclePhysics folder and have a filename of %s.cfg, where %s is the name of the vehicle's class (e.g. COMP for the Compact Class), followed by CAR, the index of the car in its class and the .cfg extension. For example, the Compact Type 1's data is exported to COMPCAR1.CFG.

Although this build is only presented in the form of an executable, it presents a couple of differences to be noted compared to the July 8th, 2005 build that it is acquired from, aside from the obvious debug tools.

In the rewards menu, the game alludes to containing 90 vehicles instead of 89 like other versions. It is unknown if there was actually another planned vehicle or if it was merely a spot for per say a testing vehicle that had not been fully removed, since this build contains debug tools.

In this build, there are 4 signature takedowns that are missing from other versions beyond this point. Due to not containing textures, they show up blank in the rewards menu but can still be acquired through normal gameplay. These include:

Retrieved from "https://www.burnout.wiki/w/index.php?title=Burnout_Legends_(2005-06-06_build)&oldid=5783"
Cookies help us deliver our services. By using our services, you agree to our use of cookies.